Every season, English Premier League provides us with a lot of exciting matches and a lot of teams that are achieving more than was predicted. From time to time, we have a surprise when a complete underdog wins the championship. It happened two times since the league was established, with Blackburn Rovers winning in 1994 and Leicester City winning in 2016.

However, with the competition stirring up in the last couple of years, we wouldn’t be surprised if something like this happens in a couple of seasons in the future. All in all, we are not talking about the best football league in the world, we are also talking about one of the most exciting ones in this day and age.

At the same time, many people who follow this league carefully every year are interested in what new players will make a breakthrough. One of the ways to use the knowledge about the players is to place a wager on their performance. Thankfully, we can bet at home on this day and thanks to numerous online sports bettors.

Now, we want to discuss, according to many, the two best players in the league, Mohamed Salah and Erling Haaland.

As we all know, pretty much every team that competes in the league has a highly-competent striker that drives his team forward. The competition this year, as every other season, is highly steep. We are not talking just about the two players we have mentioned before. Many other names deserve attention.

A good example is a surprising transfer Gabriel Jesus made from Manchester City to Arsenal. Since the start of the season, he has managed to score a couple of important goals for this team. Another prominent striker, Aleksandar Mitrovic, who plays for a newly-promoted Fulham is currently the third-best scorer in the league, after Harry Kane.

Other names are equally important to mention, like Ivan Toney, Diogo Jota, Son Heung-Min, Jamie Vardy, and one and only Cristiano Ronaldo. All of these names are expected to have a good season this year. However, the title of the best scorer will be waged between Erling Haaland and Mohamed Salah.

Mohamed Salah, since he returned to the Premier League when we went from Roma to Liverpool, is the main driving force behind Jurgen Klopp’s team. He was the best scorer and best assistant for the team for many seasons in the past. Therefore, nobody should be surprised why it is always expected of him to be the best on the field.

As we’ve said, he was the best scorer in the league several times. During his spell at Liverpool, he managed to win the long-awaited title for the Reds. As you very well know, they have been waiting for the title for almost 30 years. The year they won was a strange one due to the pause championship experienced due to the global pandemic of COVID-19.

At the beginning of this season, Liverpool is not at the highest level possible when it comes to performance. They are currently in 9th place, under teams like Newcastle and Fulham.

Yet, we have the confidence that their form will pick up in the following weeks. Also, Salah’s performances weren’t the best, even though is the best scorer on his team at the moment. 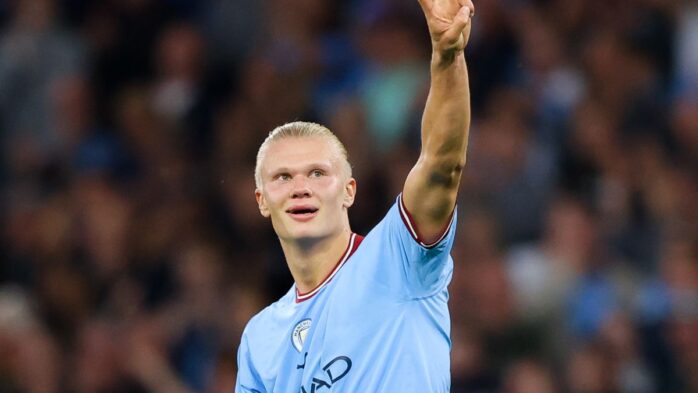 When it was announced that Manchester City will sign Erling Haaland at the beginning of the season, many fans of this club were ecstatic to hear this news. We are talking about the biggest potential in the world of football who has proven himself during his spell at Borussia Dortmund and an exceptional number of goals he scored for a German side.

What makes this story more interesting is that his father Alfie Haaland played for the same time back in the nineties. As you can imagine, the effect young Haaland had on the team was practically instant. In only eight matches, he scored exceptional fourteen goals. Not to mention that he already scored three hat tricks.

When you compare these figures to some other prominent names of the league like Nicolas Anelka, Didier Drogba, and even Cristiano Ronaldo, all of them needed more than 200 matches to reach this milestone. Young Haaland has succeeded in doing that in just a couple of weeks.

Also, Manchester City is currently holding second place in the league. The only team that gathered more points than them is Arsenal. However, all the predictions are saying that Erling Haaland and his teammates will be able to reach first place by the end of the league, and nobody certainly doubts he will be the best scorer at the end.

At the moment, Erling Haaland has the most goals under his name, fourteen. The second place goes to Tottenham star Harry Kane who has managed to score seven. The biggest surprise so far is Aleksandar Mitrovic, who scored six goals for London-based team Fulham.

The next two places are reserved for a couple of players.

Gabriel Jesus, Phil Foden, James Maddison, Leonardo Trossard, Ivan Toney, and Roberto Firmino have scored five goals so far. Probably the most interesting case is James Maddison, who is the best performing player coming out of Leicester City this year, and he is their main strength for survival in the league.

So far, Mohamed Salah has scored only two goals and has for assist under his name. We’ve already said that Liverpool is not performing as well as they used to in the last couple of seasons. Still, the last game with Rangers in UCL has proven that the team has a lot of quality to offer and we cannot wait for them to find the right form that will lead them to the top of the table.

Our opinion on who will win the golden boot in the Premier League will not surprise anyone.

We will say Erling Haaland. The start of the season was exceptional for the youngster, and his performance against Manchester United has only solidified our opinion that he will end up at the top at the end of the season.