It is not always easy to spot an animal infestation, especially when that animal is nature’s most notorious thief. Yes, we’re talking about racoons.

Racoons are known to ravish trashcans and make a mess out of people’s backyards, all while keeping that smug look on their little faces. But that’s not the worst thing about them. Aside from bats and foxes, racoons are one of the primary carriers of the rabies virus in Canada. Even though an infected, rabid racoon will usually day in only a few days after becoming infectious – you shouldn’t risk it.

On that note, here are some warning signs you need to call racoon removal services.

Racoons are particularly keen of the night. Even though they’re not quite nocturnal animals, you usually won’t spot them during the day. To be fair, you probably won’t even see them during the night – but you might hear them.

Racoons love ravishing trashcans, and in doing so – they make a lot of noise. So, if you hear a strange noise coming from your trashcan during the night – you probably have a masked visitor in there somewhere.

Not only that, but racoons are capable of producing a variety of sounds – some eerier than the other. So, if you happen to hear growling, chittering, snorting or any other unusual sound during the night – you should probably call someone up.

If you notice tiny footprints in your backyard – don’t worry. There are no leprechauns or tiny people wandering around your backyard at night – it’s racoons. Racoon tracks resemble tiny human footprints, so if you happen to spot them in your soil, you ought to give raccoon removal Toronto a call. If the tracks are present, it is quite possible that these little guys have been around for quite some time, and they’ll definitely come back.

Identifying racoon feces can be quite tricky if you’re not an expert in the field. They don’t have a particular distinguished look, so you could easily tell them apart. However, racoons prefer to relieve themselves in particular locations. Namely, racoon scat can be often found near the bottom of a tree or near piles of wood. So, if you have trees in your backyard, or you keep the firewood out in the open, and you notice some feces around it – it’s time to call up racoon removal services.

Aside from relieving themselves near wood, racoons also love to scratch it. If you happen to notice that the bottom of the tree in your backyard is scratched – a racoon has probably paid your home a visit several times.

In addition to trees, racoons will often scratch other wooden surfaces around your home.

They’ll scratch your fence, shed, porch, steps, or any other wood surface they stumble upon, and unless you love the new look – give racoon removal services a call.

There you have it. Those were the most common tell-tale signs that you’re dealing with a racoon infestation. If you happen to notice any of them, we strongly urge you to call someone for help before the problem gets out of hand. What’s the Difference between a Steam Shower and a Regular Shower? What Is the Best Way to Circulate Heat from a Wood Stove? 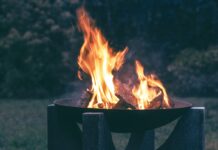 How Close to a House Should a Fire Pit Be?